How Chime helps the Enterprise

"Our employees are extremely happy with the ability to receive help using Microsoft Teams. Since they are not tied to a phone they can continue to work while they are waiting for the agent to answer their request."
IT Service Desk Architect

Click-to-chat using Microsoft Teams was a brand new solution for the service desk and it was critical for the following business issues to be fulfilled.

Instant Chime for Microsoft Teams has enabled the service desk agents to work on more than one issue at a time. This is a huge advantage over phone support, where the agent can only work with one user at a time. With queues in several languages, including English, Spanish, French, German, Mandarin, Korean, and Russian, employees from offices around the world can get the help they need in the language they speak.

As a global enterprise, the company has end users that speak a variety of languages, and accents are always a concern via phone support. Chat support helps to neutralize the accent barrier between the end user and the service desk agent and also leads to higher customer satisfaction.

Since both the end user and service desk agent are utilizing the Microsoft Teams client, they are able to use a majority of rich client features, including the screen capture feature. The end user can send screenshots of their environment which helps the agent quickly identify the issue. In addition, the agents can send the end users a series of steps that they need to perform, or a link to an existing procedure. 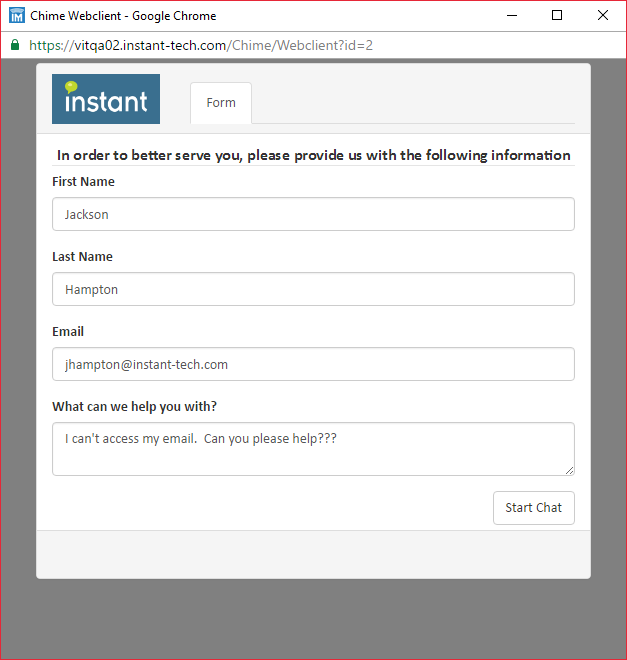 Security is a high priority and major concern for most companies. By having Chime deployed behind Azure Front Door, the company prevents any unwanted access to their environment.

Chime virtual agents perform automated tasks at specific points in the Chime session (chat session) life cycle. This company uses two different virtual agents. One to assist in skill tag routing (rout/connect to different agents based on particular skills they have). The other one is an SMTP virtual agent that sends an email to a 3rd party ticketing system for easier integration. These two virtual agents have pages of their own:

Complete the Form to Receive a Free Trial